Do you want to meet in person to discuss the impact of recent market volatility on your current portfolio?

Over the past few weeks hardly a day passed when a buddy didn’t call and want to talk about the implications of Greece declaring bankruptcy or the collapse of the Chinese markets.  Fear (selling) and volatility gripped the global capital markets!

The Greek Prime Minister announced an emergency vote by the Greek public to agree or disagree to keep their promises on reforms sanctioned by their creditors.  The fear was heightened as prominent Greek government officials suggested a nationalization of Greek banks, utilities and other industries.

Since no member of the European Union (EU) has ever defaulted on its debt the Greek situation is of historic significance, however, not of Biblical Proportion!  Greece is a member of the EU, shares a common currency and enjoys open trade between countries.  Greece is a test case for sovereign countries (Think PIGS = Portugal, Ireland, Greece and Spain) borrowing funds from other nations to sustain deficit spending.  If Greece defaults on its debt, then might other countries?

The Chinese situation is complicated as China is engaged in a painful evolution from being an Emerging Market to becoming a Developed market.  China, a prominent presence in the Global Economy (even though China remains ‘closed’ – the government effectively controls everything absent free-market convention), recently experienced a dramatic stock market decline that influenced trading decisions (I wanna sell) of market participants around the globe.

So why are all the financial pundits jumping up and down?  (Should we consider the ulterior motives of selling magazines and keeping viewers eyes glued to the television set?)

As Investors let’s contemplate:  Whereas every investor in the world is well aware that Greece can’t and/or won’t, absent some dramatic action by a lender like the International Monetary Fund (IMF), be able to meet their obligations; is it reasonable to believe that today’s stock prices already reflect the news?  Are the impacts of unfolding events already ‘priced into’ today’s stock prices?

In Greece what’s going on has been coming on and the risks are, we believe, already ‘priced into’ the capital markets as evidenced by the current 21% interest rate on Two-Year Greek government bonds.  Will Deener, Dallas Morning News, noted, “criminals get lower interest rates from loan sharks!”  We believe the possible default by Greece on its debt is ‘priced into’ the global markets.

And, as investors, let’s contemplate China:  Is it reasonable that after the irrational/meteoric advance – a substantial pullback might actually be healthy?  Additionally, we believe the painfully slow Chinese adoption of free-market infrastructure (China migrating from an Emerging Market to a Developed Market) is fraught with uncertainty…investors hate uncertainty…volatility is to be expected.  This uncertainty is ‘priced in’!

If all of this makes your head spin, let’s address the question “what should we anticipate as expectations become realities”?  If the news is, likely, already ‘priced into’ today’s global equity markets – should we not expect larger than usual daily swings in their markets – IN BOTH DIRECTIONS?  Investors driven by fear will be selling on any significant downward movements (a really bad idea to sell low) while investors with cash on the sidelines will likely be buying the dips (maybe Warren Buffet will wade in)?

Our beliefs as regards the Greek bankruptcy and Chinese volatility are summarized as follows:

BELOW please find a chart of Global Market Capitalization showing each country’s ‘mass’ – not by ‘land mass’ but rather by the ‘mass’ of their stock market valuations.  We believe a globally diversified portfolio is in the best interest of every equity investor.  Attendant to this diversification there will always be a troubled market and an ecstatic market.  In aggregate, we believe ‘hitching our wagons to global capitalism’ is a good idea!

Observing that The Sky Has Not Fallen, expecting some new crisis tomorrow and encouraging a focus on achieving your uniquely personal goals while each Current Crisis sorts itself out, we remain 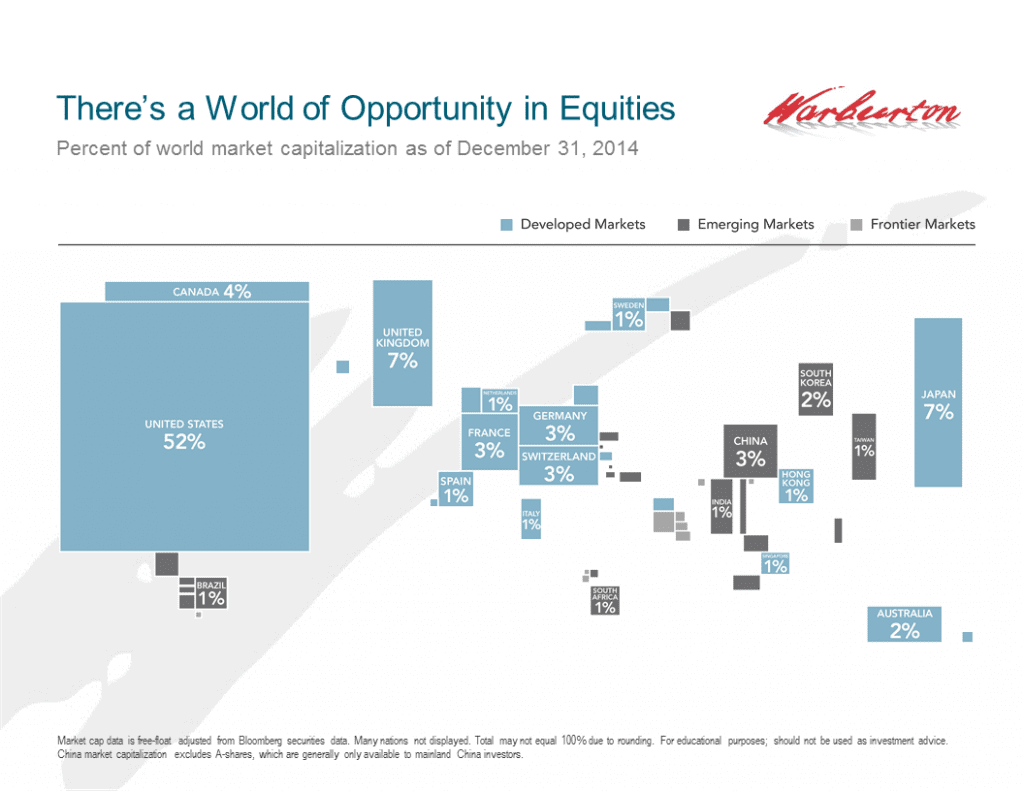