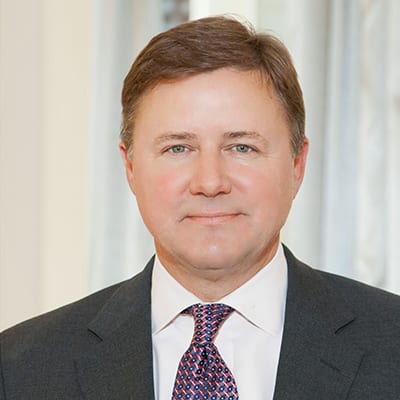 Gentner Drummond is a member of Warburton Capital Management’s Board of Directors. He graduated from Oklahoma State in 1984 as the University’s top graduate.

Following completion of his Undergraduate Degree, Mr. Drummond served as a combat mission commander in the Gulf War and flew the F-15C fighter jet in two operational Air Force squadrons between 1986 and 1992. He was awarded the Distinguished Flying Cross, a military decoration awarded to any officer or enlisted member of the United States Armed Forces who distinguishes himself or herself in support of operations by “heroism or extraordinary achievement while participating in an aerial flight” and three Air Medals which are awarded for “meritorious achievement while participating in aerial flight”.

After his military service he attended Georgetown Law and served U.S. Senator Boren as legislative assistant.

He is married to the former Wendy Poole, and they have six children.